First known inhabitants in Ljubljana were Mostiscarji (lake-dweling people) round 2000 BC.

Illirians and Celts were the folowing peoples on this area. Around 50 BC, the Romans built a military encampment that later became a permanent settlement called Iulia Aemona – EMONA, which was torn apart by Atila and the Huns.
In the middle ages the settlers came closer to the hill near todays center of Ljubljana an started to build a real medieval town. 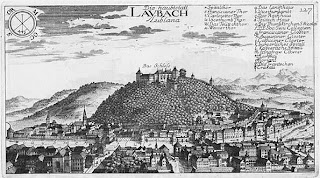 In 1220, Ljubljana was granted city rights, among others the right to coin its own money. Craftsmen, who made up the greater part of the city's population, were organized in craft guilds. In 1270, the city was conquered by the Czech king Premysl Otakar II, and in 1278 it fell under the Hapsburg rule along with the rest of the Province of Carniola (Dežela Kranjska).


A rapid growth of Ljubljana, which was at the time called Laibach, started in the 13th century, when the town consisted of three town cores: Old Square, Town Square and New Square. The town was entered by five gates and its three quarters were connected by two bridges, namely the Lower Bridge and the Upper Bridge, which later assumed the name of Butchers' Bridge and is currently known as the Cobblers' Bridge.

In the 15th century, Ljubljana became recognised for its art.  After the 1511 earthquake, Ljubljana was rebuilt in a Baroque style following the model of a Renaissance town; after the quake in 1895, which severely damaged the city (approximatli 10% of the buildings were seriously damaged), it was once again rebuilt, this time in a Vienna Secession style.


The city's architecture is thus a mix of styles. The large sectors built after the World War II often include a personal touch by the Slovene architect Jože Plečnik.

In a study for the regulation of Ljubljana (1929), the architect Jože Plečnik designed the city of Ljubljana concentrically within the circular road, which he drew on the edge of town. It included the nearest villages and settlements that were then near Ljubljana and were intensively growing.
After the worl war II the first urbanistic document was GUP (General Urbanistic Plan of Ljubljana), that was exepted in 1966. The base for its preparation were theoretical studies since the end of World war II. GUP summerized and upraded morphological model of the town that has been developing trough the centuries. GUP introduced regulated zoning plan on the whole area and organized infrastructural system.
Plan LJUBLJANA 2000 was created in the late 80's as a long term plan that included Ljubljana and its sorounding municipalities. Creators have been thinking about new recognizable image of the city. It included tram routes new train network with maintaining important green areas.

Municipality of Ljubljana adopted a document in 2002 that constitutes a further development in the area on the strategic level. The new spatial design guidelines gave the concept of planned spatial development in the municipality. Determined the location of the main activities and land use, important systems and particular transport infrastructure, and protection of heritage and natural and other resources.